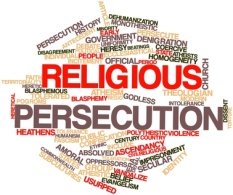 We have all heard for years about people being persecuted for their faith. In the United States, many of us have been lulled into complacency, thinking such things could never happen here. But they are. Christians are being threatened, losing their jobs, losing their businesses, and suffering other such treatment for living and sharing their beliefs. In many people’s eyes, Christians have become the “bad guys.” Anti-Semitism is also raging.

In a nation uniquely founded upon the Judeo/Christian ethic and “Freedom of Religion”, Americans have been witnessing committed Christians being persecuted in their own country. Over the last six-plus years, there have been rapidly expanding attempts to marginalize, demonize, and criminalize the free practice of the Christian faith in the US Armed Forces and in the United States in general. Restoring Liberty

I hope you will take a few minutes to read this eye-opening article from Liberty First: “10 Ways Hostility to Religious Freedom Has Hurt These Americans.”
Each of us has a choice. Will we turn a blind eye? Will we wait until it affects us personally before we take a stand? This is a good time to recall Edmund Burke’s words: “The only thing necessary for the triumph of evil is for good men to do nothing.”

What can we do? First, stay informed. Read the Tweets listed on our website and others like them. Subscribe to pertinent newsletters. Take action by helping others stay informed . . . serving as you find opportunity . . . donating to organizations you feel are making a difference . . . whatever the Lord leads you to do. And above all, pray.

The earnest prayer of a righteous person has great power
and produces wonderful results.
James 5:16 NLT

Blog: Pray for Ministries Around the World